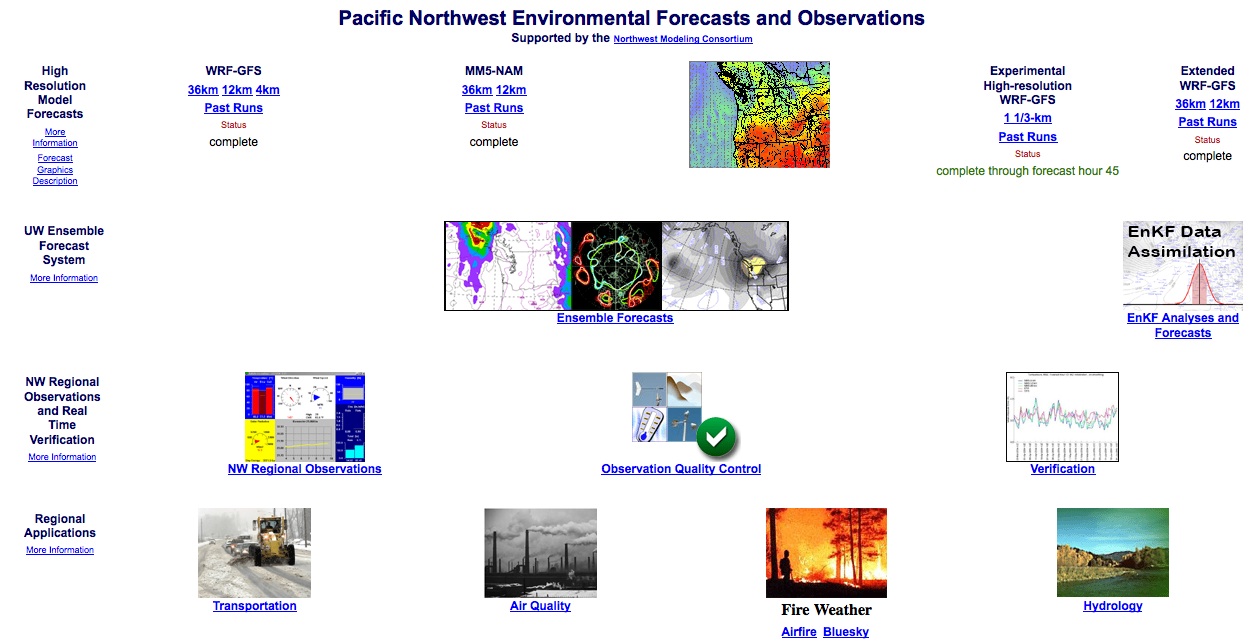 Operational high-resolution environmental prediction over the Pacific Northwest has been sponsored by a consortium of local, state, and Federal agencies.  Each agency has recognizes its need for detailed weather information or forecasts and that by combining resources and talent we can accomplish what was impossible to do alone.  The activities of the consortium include:

The Northwest Consortium began in the early 1990s when a group of agencies recognized the lack of upper air data over the Puget Sound basin.  By pooling funds, five agencies were able to purchase a Radian 915 Mhz profiler in 1992.  By the mid 1990's, research at the University of Washington and elsewhere suggested that high resolution mesoscale weather prediction models could be run on workstations, and that the results for Northwest weather features were quite promising.  In 1994 the Consortium provided funds to the University of Washington for an evaluation of the MM5 over the Pacific Northwest and the purchase of a powerful single processor workstation.  With promising results, this activity led to the beginning of operational MM5 forecasts (single 27-km domain) in 1995.  In 1996 the Consortium purchased a SUN 4000 with 14 processors.  With greatly increased computer power, during late 1996 a new model configuration was established:  36 km grid spacing over the eastern Pacific and 12-km over the Northwest.  A year later, upgrades to the processors allowed the enlargement of the 36 and 12 km domains, and the addition of a 4-km domain over the western half of Washington State.   In 1999 and 2000 substantial improvements were made to the modeling system and work on forcing a distributed hydrological prediction system  with the MM5 were begun.  In the latter year a 4-processor Alphaserver was acquired, allowing the 4-km domain to be expanded to the entire State of Washington.  During mid-2000, a SUN 6500 server with 23 processors was acquired and the 4-km domain was expanded to include both Oregon and Washington.  The additional computer resources allowed the initiation of a regional ensemble forecasting system in which the MM5 was run several times using different large scale initalizations/boundary conditions and varying physics.  Also in 2000, a real-time effort to run the CALGRID air quality model forced by the MM5 was begun.   In addition, smoke, ventilation, and fire products driven by local data assets and the MM5, now WRF, have been added.

During the past five years, significant improvements in the output graphics, model physics, and web site have been made, and a WRF-based high-resolution (4-km) ensemble system has been constructed and expanded. We have moved to a large 28-machine Intel-based system with 624 cores and an aggregate RAID disk storage of over 400 TB.

Current members of the consortium include:

The chair of the Northwest consortium is Phil Swartzenduber of the Puget Sound Clean Air Agency. His contact information is: phils@pscleanair.gov, 206-689-4085.

The Northwest Consortium meets quarterly in Seattle.  Typically, the air quality group, NW-Airquest, meets in the morning, with the full meeting in the afternoon.