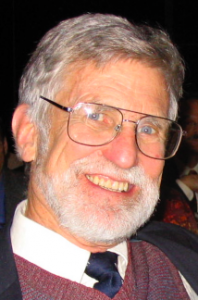 In recognition of his distinguishd career as a faculty member, a remembrance celebration of Conway Leovy will be held at the University of Washington at 3:30 pm, Friday, September 30, in 102 Johnson Hall.

Conway’s contributions to our understanding of planetary atmospheres span over forty years, thirty-one of which were spent as a professor at the University of Washington (UW). Conway joined the UW faculty in 1968 and was a full Professor from 1974 to 1999, after which he retired from teaching but remained active in research. He received a BA in Physics and Mathematics from the University of Southern California in 1954, was a weather forecaster for the US Air Force from 1954 to 1958, and completed a PhD in Meteorology at MIT in 1963. Before he joined the University of Washington, Conway was a research meteorologist at the Rand Corporation in Santa Monica, CA, where he made major contributions to our understanding of the chemistry and dynamics of Earth’s atmosphere. During these early years, Conway furthered our understanding in different branches of atmospheric science: the chemistry of atmospheric ozone, the behavior of convection near the surface of the Earth, and the energy budget and motion of the air in Earth’s mesosphere (about 55-85 km altitude). It was at Rand that Conway began research about Mars—a scientific area that continued to fascinate him throughout the rest of his career. After Conway joined the University of Washington, he extended his research to other celestial bodies, including Jupiter, Venus and Titan. One of Conway’s hopes was that a general theory of atmospheric dynamics might be developed that could explain the observed winds, temperatures and energy distributions in each planetary atmosphere. But when the data came back from spacecraft in the 1970s and 1980s, he came to realize that planetary atmospheres are so strange and diverse that a group of general principles rather than a general theory was the more practical pursuit.

One of Conway’s early scientific achievements was the first ever computer model of Mars’ global atmosphere. The model was an early version of the sort that’s commonly used today to simulate the Earth’s climate. Conway worked with Yale Mintz of the University of California, Los Angeles, who, according to Conway, “painted this immense canvas of applying numerical models to every atmosphere in the Solar System” in lectures during the early 1960s. Carl Sagan’s former student, Jim Pollack, who was at NASA’s Ames Research Center, recognized the importance of the Leovy-Mintz model for NASA’s Mars exploration and began a collaboration that brought the model to Ames. The computer model has evolved and continues to be improved up to the present day. Indeed, the Ames model and similar forms of it elsewhere are the basis for predictions about the Martian atmosphere used by NASA for sending probes to Mars.

Conway was fortunate to come of professional age during the Space Age, which enabled him to participate directly in NASA’s missions to Mars. These were groundbreaking missions because the limitations of telescopic studies left a great deal to be discovered. During the 1960s, Conway participated in imaging experiments on NASA’s Mariner 6 and 7 flyby missions to Mars, which were followed, in the 1970s, with participation in the imaging experiment of the Mariner 9 Mars orbiter and the Meteorology Experiment on NASA’s Viking Landers. Later, Conway was a Co-Investigator for the Mars Climate Sounder instrument on Mars Reconnaissance Orbiter, launched in 2005. In 1973, Conway was awarded the NASA Exceptional Scientific Achievement Medal—an award given for unusually significant scientific accomplishments that contribute to NASA’s programs. He was also a joint recipient of the 1978 American Association for the Advancement of Science (AAAS) Newcombe Cleveland Award given to the scientific investigators on NASA’s Viking Mission.

Missions to Mars were only part of Conway’s involvement with space projects, because he also was involved in observing the Earth’s atmosphere from space. In the 1970s, Conway became a Co-Investigator for the Limb Infrared Monitor of the Stratosphere (LIMS) instrument that flew on the Nimbus 7 satellite. LIMS was designed to measure vertical temperature profiles and the concentrations of key chemical compounds that were important in the stratospheric chemistry of ozone; ozone itself was directly measured by another instrument on Nimbus 7. Nimbus 7 observations obtained between 1978 and 1994 showed that the ozone hole appearing each winter season over the Antarctic grew bigger and was definitively linked to manmade chlorofluorocarbons. Later, Conway participated in the Upper Atmosphere Research Satellite, deployed in 1991 by the Space Shuttle. Data from this satellite improved our understanding of the chemistry and radiation of Earth’s mesosphere and stratosphere. Besides these studies, Conway also became interested in the climatic impact of clouds over the ocean. For the wider community, Conway served on committees for NASA, the National Academy of Sciences, and the University Cooperation for Atmospheric Research. At the University of Washington, Conway was also the director of the Institute of Environmental Studies from 1986 to 1989.

Conway’s outstanding contributions to science are his studies of the structure and circulation of planetary atmospheres, their radiation, and their interactions with the planetary surfaces. Conway always favored an interdisciplinary approach and in the late 1990s, he became a great supporter of NASA’s new thrust in astrobiology, i.e., the science concerned with life on Earth and elsewhere in a cosmic context. At the same time, Conway developed a keen interest in examining the geology of the surface of Mars to look for signs of ancient climate change. In 2000, the contribution of Conway’s career was recognized by the Kuiper Prize of American Astronomical Society’s Division of Planetary Science. The Kuiper Prize is awarded to scientists whose achievements have most advanced our understanding of the planets.

Of course, great professors also have a very large influence through their mentoring of students and assistance to colleagues. Many of Conway’s former graduate students have gone on to notable careers as government scientists and university professors. Graduate students advised by Conway include:

The memorial service was held on Saturday, August 13, at 11:00 AM at Woodland Park Presbyterian Church, 225 N 70th St, on the corner of Greenwood Ave N and 70th (~10 blocks north of the zoo). There was a reception afterward.