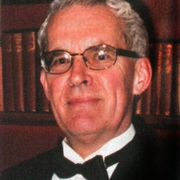 From his obituary published in the Seattle Times on July 31, 2005

Peter V. HOBBS Peter V. Hobbs died peacefully at home on July 25, 2005. Peter was born in London, England on May 31st, 1936. He was evacuated to the north of England during World War II and returned to his home in Richmond, Surrey, at the end of the war with a north country accent which could not be understood by his brothers and sisters. He had a wild and adventurous childhood during the post-war years in London. He was an excellent swimmer, and won many awards for boxing, becoming Junior Boxing Champion of the County of Surrey. In his teens, Peter found he had a great love of mathematics and meteorology, mainly through the influence of an excellent teacher. He went from his secondary school at age 16, to Kingston (London) Technical School and took the required subjects for entrance to University, which normally took 7 years, in three years, receiving distinction in all subjects (except failing in French). Peter was accepted into the Imperial College of Science and Technology (London University), but was conscripted into the Royal Air Force for two years before he could enter. Fortunately for him he was given meteorological work to do during that time. He also fitted in a good social life, enjoying the restaurants and musical offerings of London, a love of which remained with him all his life. At Imperial College he won many awards, gained his B.S degree in Physics and later his Ph.D. in Cloud Physics in 1963. That same year, Peter married his wife, Sylvia, and immigrated to Seattle where he took a post as Professor in the Atmospheric Sciences Department of the University of Washington where he worked for the next 42 years. Peter was passionate about his work on the physics of clouds. He enjoyed writing several books and many scientific papers on atmospheric science. He loved taking his Cloud and Aerosol Research Group’s plane all over the world. The high points of these flights included flying over Mt. St. Helens only hours after its famous eruption in 1981, and flying over the flaming oil fields of Kuwait during the Gulf War. Peter was a dedicated teacher and graduated 29 PhD students and 34 Master’s students during his time as a professor. He was cited in the 2005 Guinness Book of Records for measuring the largest raindrop ever recorded. Along with his love of science, Peter was passionate about opera and classical music. Peter’s family and friends were a very important part of his life and he was especially proud of his three sons. He leaves behind his wife, Sylvia (who shared his life-long passions of opera, music, theatre, literature, history and travel), sons Stephen and wife, Shannon, in Seattle, Julian and wife, Minerva, in Washington, DC, and Rowland in Manhattan, New York. He also leaves three much-loved grandchildren: Juno, Sage and Skye. Peter will be very much missed by all the family; he was a strong, loving presence in all of our lives. He also leaves behind his mother, Daisy, (his father, Victor, preceded him in death in 1989) and two sisters, Christine and Susan, in London, his brother, Roy, in France and their families (two siblings preceded him in death when very young), and his aunt and uncle, Eileen and Leonard. There will be a private cremation and no service, by Peter’s request. In lieu of flowers, donations can be made in Peter’s memory to a fund for young aspiring singers and musicians: “Catch a Rising Star”, School of Music, University of Washington, Seattle, WA 98195. For more about Peter’s life please go to www.peterhobbsintoclouds.net