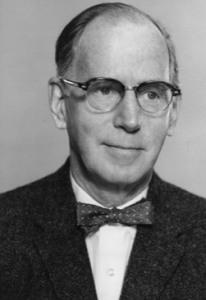 Necrology for Phil E. Church
For many years before his death on May 30, 1977, Phil E. Church was so closely associated with the Pacific Northwest that it comes almost as a surprise that he was not a native of this well-loved region.

He was born on April 8, 1902 in the Chicago suburb of Berwyn, Illinois, son of Harry Victor and Katherine Edwards Church. His father was for many years principal of Morton High School of Cicero, and it was there that Phil received his secondary education. After earning his Bachelor’s Degree at the University of Chicago, he went on to teach science subjects at several high schools in northern Illinois, between 1925 and 1935. It was during this period that he met and married Loretta Liedel, a young music student in Chicago. Those fortunate enough to know the Churches in subsequent years realize how important she has been to the warm, affectionate spirit that pervaded the family and spread to colleagues, neighbors, and a host of friends around the country.

In 1930, Phil (he had given up the longer form of his name some years before) turned to graduate studies at Clark University, with summers spent at Woods Hole Oceanographic Institution. He chose Clark because of the presence there of C. F. Brooks, one of the leading meteorologists of the day, and a founder of the American Meteorological Society. He received his Master’s degree in 1932, went back to school teaching, then returned to Clark, where he earned his Ph.D. in 1937. Brooks by that time had gone on to Harvard, but through him and because of his own gregarious nature, Phil had met and become friends with other young meteorologists who were then concentrated along the eastern seaboard at MIT, Woods Hole, and Washington, D.C. Athelstan Spilhaus, Harry Wexler, and Carl Rossby were among those he met at that time and retained as life-long friends and associates.

Even before finishing his graduate work in the middle of the economic depression, he found a position as instructor of meteorology in the Geography Department of the University of Washington. Thus began his love affair with the State of Washington and the waters of the Pacific Northwest. He gloried in the beauty of his adopted home and could marshal impressive statistics to show it to have the most salubrious of climates, even including just the right amount of rain to nourish the worthy and to discourage the faint of heart. By the time of World War II, he had progressed to Assistant Professor; it was at this point that Carl Rossby, gathering together a faculty for the burgeoning department at the University of Chicago, got him to return to Chicago to conduct oceanographic research and to teach the crowd of young recruits being trained for the Air Force.

While at Chicago, he did some of his best-known research work on the temperature structure of Lake Michigan. For this study he mounted oceanographic equipment on the railroad ferries that plied the lake in all seasons and all weather. He came to have great respect for the ship masters who commanded the vessels, and for years afterward kept in touch with some of them. During the same period, he taught hundreds of young meteorologists, many of whom are active in the field today.

During the same period at Chicago, the innocuously-named Metallurgical Laboratory had successfully operated the first atomic pile and within a few months its leaders were looking for a location for a large-scale plutonium manufacturing facility. One possible location suitably remote from large population; centers, with good rail transportation, abundant cooling water, and electric power was along the Columbia River in eastern Washington. Phil’s knowledge of the meteorology and geography of that region proved so valuable that in 1943, he was added to the staff of the Metallurgical Lab, and in 1944 was sent to the Hanford Engineering Works at Richland, Washington to set up the meteorological monitoring system that since has evolved into the Atmospheric Physics program of Battelle Northwest at Richland.

Phil returned to the University of Washington a year later, but kept an abiding interest in atmospheric diffusion and the work at Richland. As a consultant to the successive managers of the Hanford program: The Manhattan Project, E. I. DuPont, General Electric, and Battelle, he played a decreasingly active role after 1950, but retained numerous personal connections with Hanford throughout his life. Many of the meteorologists there were trained in the academic department he set up after returning to Seattle.

In 1947, two years after returning to the University, he was invited to organize a new department, the Department of Meteorology and Climatology. Thus began the effort which led to his proudest achievement, the establishment of a successful academic department from scratch. For the next 20 years, he headed the unit, later renamed the Department of Atmospheric Sciences, in the process evolving from the newest to the oldest and most experienced department chairman in the college. His colleagues remember gratefully how Phil, recalling other autocratic academicians he had served under, and in spite of his own strongly-held opinions, conducted departmental affairs openly and democratically, finding his way around and through bureaucratic red tape with experienced ease.

The department being well-established, Phil was able to turn some of his attention to the numerous hobbies, if that is the right term, at which he was consummately successful. A number of these could have been full-time careers under other circumstances. He was always an admirer of craftsmanship in others, and could turn his hand with skill to a variety of tasks.

Back in his high school teaching years, when ingenuity was more plentiful than money, having decided to build a large globe for teaching geography, one that neither he nor the school could afford, he collected material for it by encouraging students to save used paper towels which he made into papier-mâché that formed the bulk of the globe. Its support he fashioned out of forged steel; the surface he smoothed and painted, drawing in the maps meticulously by hand. The globe, more than a meter in diameter, remained in his office to the end of his life, and is now a prized possession of his family.

His craftsmanship in wood was well-known to his friends; he delighted in duplicating period furniture and in making other fine objects. His own home and those of his daughters are furnished with period pieces, many copied from collections in museums which Phil visited on his travels. A clock of his manufacture is in the Brooks Room at the headquarters of the American Meteorological Society, a gift from Phil during the time he served as Councilor.

He was a knowledgeable und enthusiastic gardener and beekeeper, but undoubtedly, his crowning agricultural achievement was in viniculture and wine-making: From his study of climatology and knowledge (from Hanford days) of eastern Washington State, he believed that high-quality wine grapes could and should be grown in the Columbia Valley. With nine associates, many of them from the University, he helped set up a group to grow the highest quality grapes and manufacture fine wines. This enterprise, known as Associated Vintners of Washington, is now a successful small business, unable to keep up with the strong demand for its prize-winning products.

Over the years, he served the AMS in many capacities including three terms as Councilor and one as Vice President. He was one of the first to be named a Fellow of the Society. He conceived of and carried through the arrangements for the Golden Anniversary Fund whereby special gifts were held in an investment trust and turned over for use by the Society on the occasion of its fiftieth anniversary.

He was also a member and officer of other scientific societies, serving as Chairman of the Meteorology Section of American Geographical Union in 1953-56, and as President of the Pacific Division of AAAS in 1960-63. He was a trustee of the University Committee for Atmospheric Research, UCAR, from 1959 to 1967, and its Treasurer in 1964-67.

Parallel with all this activity, he maintained an active professional life. Phil’s scientific interests were broad but centered around the study of climatology. His interest in oceanography and limnology stemmed from the importance of water bodies as heat reservoirs for the atmosphere. During his association with the Hanford project, he initiated studies of atmospheric diffusion that still continue there, and which have born additional fruit in the research done at the University of Washington on the atmospheric boundary layer. Because of his interest in arctic climatology, he and his colleagues began arctic studies during IGY in 1957, and these continue, most recently in the form of AIDJEX (Air Ice Dynamics Joint Experiment) based at the University.

These activities slowed only slightly when he retired as departmental chairman in 1967, but with full retirement at the age of 70 in 1972, he slackened his pace considerably, spending only two days a week at his desk and taking time to travel, especially to visit his four daughters and their families.

It was while visiting one of his daughters in California that Phil suffered a fatal heart attack and passed away surrounded by those dearest to him.

Surprising even to his closest friends was an interest in music that Phil developed in the last few years of his life. He had composed some folk-like tunes which were arranged and written down by a musician of his acquaintance. It was fitting at the memorial service held on June 5, in the family church, that ‘this music should be played in memory of one who had lived a full, rounded, and productive life.