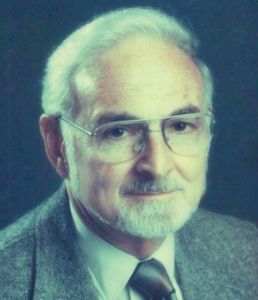 Upon learning of the death of Dick Reed, his long-time friend Richard Goody remarked that there is a sense in which Dick’s passing marks the end of an era in American meteorology.

Richard J. Reed was born in Braintree, Massachusetts, on 18 June 1922. He demonstrated an early ap- titude for math and science. Upon graduating from high school, he enrolled at Boston College to prepare himself for a career in accounting. Immediately following the bombing of Pearl Harbor, he enlisted in the U.S. Navy, choosing aerology (meteorology) as his specialty. It was a field he knew little about, but from the start he loved it with a passion. It was a matter of rare good fortune, he often recalled, that by failing the U.S. Naval Academy eye exam he was given the opportunity to further his education at Dartmouth and obtain a B.S. in meteorology from the California Institute of Technology while still in uniform.

Following his discharge from the Navy, Reed was accepted to the doctoral program in meteorology at the Massachusetts Institute of Technology (MIT), where he received his Sc.D. in 1949. His doctoral dissertation, written under the supervision of Hurd Willett on the topic “The Effect of Atmospheric Motions on Ozone Distribution and Variations” resulted in his first refereed publication. He remained at MIT for five years as a postdoc, supported by one of James Austin’s research grants. While at MIT, he  met Joan Murray, a recent emigré from England, whom he married in 1950. Joan recalls that in his spare time, Reed had a contract with NBC-affiliate radio station WBZ in Boston to broadcast weather forecasts from their home and that on some occasions, the voices of their children could be heard on the air in the background.

Fueled by (in his words) his “insatiable desire to observe and understand atmospheric phenomena,” Reed’s research spanned virtually the entire field of meteorology. His research addressed mechanisms for the transport of atmospheric ozone, structure, and dynamics of extratropical cyclones and their at- tendant upper-level jet streams and fronts; numerical and automated graphical weather prediction meth- ods; Arctic climatology; structure of extratropical cyclones as revealed by radar imagery; annual, semi- annual, and quasi-biennial oscillations in the strato- sphere; polar stratospheric sudden warmings; atmo- spheric tides; left-moving supercell thunderstorms; easterly waves in the tropical North Pacific; African waves; clear air turbulence; orographically forced windstorms; and polar lows. Among the highlights of his research career was his discovery of the equatorial stratospheric quasi- biennial oscillation (QBO) based on analysis of rawinsonde data at two tropical stations and the ensuing scientific exchanges between Reed, Richard Lindzen, and James Holton that led to a dynamical explanation for its existence. Reed’s analysis of rocketsonde observations proved to be a key piece of evidence in validating Lindzen’s theory of atmospheric tides.

Much of Reed’s research was mo- tivated by his desire to advance the state of the art of weather prediction. Like most meteorologists who entered the field during World War II, much of his education stressed the “art” of weather forecasting—that is, skill and speed in manual map analysis and subjective judgment based on experience. Although he excelled at the art of weather forecasting and often used it to his advantage in weather forecasting contests, he was among the first of his peers to recognize the value and potential of numerical methods that could be adapted to high-speed computers, and he became one of the strongest advocates for them. He spent two of his three sabbatical years at operational nu- merical weather prediction centers (1961–62 at the U.S. National Meteorological Center and 1985–86 at the European Centre for Medium Range Weather Forecasting). Many of his papers from the late 1980s onward were based on experimentation with numeri- cal weather prediction models.

Reed viewed weather prediction as a global enter- prise, and he gave generously of his time to promote and manage international projects directed toward that effort. In the role of executive scientist in the U.S. Global Atmospheric Research Program (GARP) Office in 1968–69, he was instrumental in orchestrat- ing the early planning that led to the GARP Atlantic Tropical Experiment (GATE) in 1974 and the GARP Weather Experiment in 1979. He was among the first U.S. scientists to visit the Soviet Union and make contacts with researchers there. In 1972, as president of the AMS, he laid the groundwork for the first delegation of U.S. meteorologists to visit China after it opened its doors to the Western world in 1974, and he and his wife, Joan, were part of that delegation. One of his most memorable experiences was participating in the field phase of the GARP Atlantic Tropical Experiment in 1974, which was headquartered in Dakar, Senegal. Closer to home, he served on numerous National Academy of Sciences (NAS)/National Research Council advisory committees that provided oversight for national and international research programs.

In recognition of his scientific achievements and his service to the field, Reed received many honors and awards. He was a Fellow of the NAS, the Ameri- can Geophysical Union, and the AMS. He was an Honorary Member of the AMS and a recipient of the Society’s Meisinger, Second Half-Century, and Charles Franklin Brooks Awards, as well as the Rossby Research Medal. A symposium in his honor was organized as part of the program for the AMS Annual Meeting in Orlando in 2002. Proceedings of that symposium, together with an autobiographical chapter reflecting on his education and professional career, are published as an AMS Meteorological Monograph (Vol. 31, Number 53).

In his private life, Reed enjoyed athletics of all kinds—especially hiking and skiing in his beloved Cascade Range, accessible in a two-hour drive from his office. He had a fiercely competitive streak that was most clearly evident in weather forecasting contests, but was discernible even in the speed with which he walked on mountain trails. He spent most of his lunch hours in the gym, on the running trails, or in the swimming pool, keeping in shape. His less competitive hobbies, such as gardening, brought out the scientist and researcher in him. He care- fully documented the apple crop harvested from his orchard each year, and family members and friends were invited to participate in “tastings,” discussing in great depth the attributes of each variety. Leisure travel was often planned and mapped down to the minute and miles per gallon, and his frustration with the unpredictable nature of travel was only surpassed by his joy and wonderment at the many parts of the world that he, Joan, and the children experienced. Regardless of whether he was indoors at work or pursuing his outdoor hobbies, Reed’s expressive voice with its distinctive Boston accent were audible over large distances: it carried especially far when he was enthusiastic or excited, and that was much of the time.

Reed occasionally wrote papers just for fun. The most notable example, borne out of his “passionate dislike of UFOs, sasquatches, Loch Ness monsters, and other products of deluded minds,” was his deconstruction of a flying saucer sighting by the pilot of a light plane in the vicinity of Mount Rainier. The article consisted of a careful analysis of a sounding over Seattle on a day on which a spectacular lenticular cloud formation resembling a line of flying saucers over Mt. Rainier was captured on film by noted Seattle landscape photographer Josef Scalyea. Reed expressed satisfaction with this “offbeat paper” but regretted that it never gained prominence in the UFO literature.

Reed was blessed with a remarkable ability to remember the people in his life, extending back to his boyhood, and to form strong and enduring friend- ships that cut across class barriers. He was dedicated to his family, friends, students, and colleagues, and his loyalty extended to all the institutions to which he felt he owed a debt of gratitude, including his alma mater, his university department, the professional societies in his field, and his country. In recognition of his own free undergraduate education while he was in the navy, he and Joan endowed a scholarship for undergraduate students in his department. Having himself dropped out of college after his first year for lack of tuition funds, being able to help promising students who were financially in need gave him great satisfaction.

Reed died after an extended illness on 4 February 2008 with family members at his side. He is survived by his wife, Joan; sons, Ralph and Richie; daughter, Lisa Feshbach; grandchildren, Emma, Reed, and Sage; and his brother, Robert. Memo- rial contributions may be made to the Richard J. and Joan M. Reed Endowed Atmospheric Sciences Scholarship Fund, c/o Department of Atmospheric Sciences, Box 351640, University of Washington, Seattle, WA 98195.