The purpose of the Peter V. Hobbs Memorial Endowed Lectureship in Experimental Meteorology shall be to sponsor open lectures in the field of experimental meteorology. Peter Hobbs felt strongly that the furthering of science must be nurtured through the open exchange of ideas amongst scientists. To that end, he planned to fund an Endowed Lectureship in Experimental Meteorology for the Atmospheric Sciences Department at the University of Washington where he had worked for 42 years.

Lecture: “The history of cloud seeding to enhance precipitation, and prospects for the future”

Cloud seeding is conducted in most states in the western United States, and in other arid regions around the world, in order to enhance precipitation. The main target is winter storms over mountains. The history of cloud seeding is long, and many cloud physicists, including Peter V. Hobbs, built their early career on researching seeding efficacy in the 1960s-1980s. Federal support for weather modification research ceased about three decades ago, not because of environmental or ethical concerns, but rather because of the difficulty of signal detection in the “noise’ of natural variability. Peter V. Hobbs became one of the most vociferous scientists to show that some published claims of seeding impact were exaggerated, false, or unverifiable. Operational seeding, meanwhile, has continued unabated, especially in dry years. We are now in a far stronger position to study changes in mountain clouds following injection of artificial ice nuclei, by means of both detailed observations using new instruments, and high-performance computing efforts that simulate the flow, cloud, and snowfall over the mountains. Thus the National Science Foundation recently supported some field work to re-examine this issue. We now have definitive proof that cloud seeding can have a modest impact on precipitation, but it remains very difficult to detect and target the “right” clouds.

Dr. Bart Geerts conducts research into cloud-scale to mesoscale atmospheric processes, mainly using aircraft measurements and radar. Much of his research builds on field campaign observations, starting with the Genesis of Atlantic Lows Experiment (GALE-1986) where he participated as a graduate student. He received his PhD from the University of Washington (Atmospheric Science, 1990, advisor: Peter V. Hobbs), and MS (Irrigation Engineering, 1985) and BS (Physical Geography, 1984) from the University of Louvain in Belgium, his country of origin. He has taught on various campuses in the US as well as in Australia and Europe, and has been a faculty member at another “UW” (in Wyoming) since 2000. Dr. Geerts has chaired the American Meteorological Society (AMS) Radar Meteorology Conference, has served on the UCAR Unidata Committee and on several AMS STAC committees (Mesoscale Processes; Weather Modification; and Radar Meteorology). He has been involved in many field campaigns, mainly using the UW King Air aircraft, studying a variety of weather systems, including shallow cumuli, frontal systems, mesoscale boundary-layer processes, orographic precipitation, and even cloud seeding, for which he received the 2012 National Institutes for Water Resources Program IMPACT Award.

Lecture: “Uncertainties in Climate Prediction: The Influence of Clouds and Aerosols on Climate”

Clouds are not only fascinating to observe for their myriad of shapes, but are also scientifically challenging because their formation requires both knowledge about the large-scale meteorological environment as well as knowledge about the details of cloud droplet and ice crystal formation on the micro-scale. The ice phase in clouds remains enigmatic because ice crystal number concentrations can exceed the number concentrations of those aerosol particles acting as centers for ice crystals (so-called ice nucleating particles, INP) by orders of magnitude.

Aerosol particles can scatter and absorb radiation and with that cause a cooling, that partly offsets the greenhouse gas warming. Aerosol particles also influence the microphysics of clouds by acting as cloud condensation nuclei and INP. The magnitude and geographical distribution or the cooling caused by aerosol particles themselves and by aerosol-cloud interactions is much more uncertain than the greenhouse gas warming because aerosol particles have localized sources and sinks and only have an atmospheric residence time of days to weeks. An additional uncertainty related to clouds is that it is not yet clear how clouds change in a warmer climate. In this lecture, the progress that has been made in climate projections related to clouds and aerosols will be addressed.

Ulrike Lohmann is Full Professor for Experimental Atmospheric Physics in the Institute for Atmospheric and Climate Science at ETH (Swiss Federal Institute of Technology Zürich) since October 2004.

She obtained her Ph.D. in climate modelling from the Max Planck Institute for Meteorology. Prior to her current appointment, she was an Assistant and Associate Professor at Dalhousie University in Halifax (Canada). She was awarded a Canada Research Chair in 2002, received the American Meteorological Society Henry G. Houghton Award in 2007 and was elected as a fellow of the American Geophysical Union in 2008.

Her research focuses on the role of aerosol particles and clouds in the climate system. Of specific interest are cloud microphysical processes including the formation of cloud droplets and ice crystals and the influence of aerosol particles on the radiation balance and on the hydrological cycle in the present, past and future climate. She combines laboratory work and field measurements on cloud and aerosol microphysics with the representation of them in different numerical models.

I will talk about my lifelong interest in tornadoes, and how fortunate I am to be able to make a living by studying them. I will discuss how our understanding of tornadoes has evolved in time and been shaped by recent field projects like the first and second Verification of the Origins of Rotation in Tornadoes Experiments (VORTEX and VORTEX2), as well as state-of-the-art computer

Paul Markowski, Professor of Meteorology at Penn State University, was a leader of the recent second Verification of the Origins of Rotation in Tornadoes Experiment (VORTEX2) and 2013 recipient of the National Weather Association’s Fujita Award for his research on tornado formation. He has served as the Chief Editor of Weather and Forecasting since 2012.

Lecture: “The Anti-Greenhouse Effect Along the Spiral of Geologic Time”

Microscopic particles in the atmosphere including desert dust, sea salt, volcanic debris, air pollution and bio-particles are found everywhere on Earth. The particles nearly counterbalance the climate changes from greenhouse gases, sometimes shut down airports, and create a substantial health risk when breathed. More severe effects have occurred in the past.

For the first half of its history, Earth may have been enveloped in an organic haze, blocking the view of the surface from space, providing a UV shield and food for the biosphere. Earth nearly froze over several times, possibly triggering the origins of complex life about 600 million years ago, perhaps due to our passage through an interstellar dust cloud. About 65 million years ago particles generated from an asteroid collision in the Yucatan Peninsula broiled the dinosaurs alive, burned most of the extant land biota then froze the rest, and so diminished sunlight reaching the surface that the food chain in the oceans collapsed. In the past 100,000 years particles from giant volcanic eruptions may have nearly eliminated our species, and more recently caused migrations and stock market collapses. The future will see more events like these and possibly worse. The smoke generated in a nuclear war could kill the majority of the people on Earth. In the near future we may be forced to moderate the climate using particles to offset rising temperatures and sea levels due to greenhouse gases. If this geo-engineering to rescue our planet isn’t needed now, it eventually will be tens or hundreds of millions of years from now as the sun swells, brightens and threatens to turn our planet into an uninhabitable cinder. 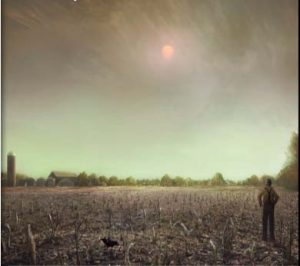 Could we all starve after a nuclear war? 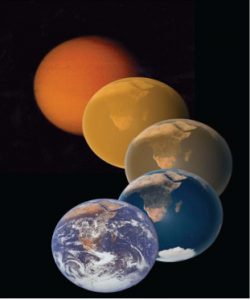 Did Earth look like Titan for half of Geologic time?

Dr. Toon is a director and professor in the Department of Atmospheric and Oceanic Sciences and a fellow at the Laboratory for Atmospheric and Space Physics at the University of Colorado. Currently, Dr. Toon is active in the following research areas: theoretical studies of stratospheric volcanic clouds and aerosols and of polar stratospheric clouds; theoretical studies of cirrus, stratus and cumulus clouds, and of direct and indirect effects of aerosols on climate; experimental investigations of stratospheric ozone loss, cirrus, stratus and stratospheric clouds, indirect effects of aerosols on clouds; and theoretical investigations of planetary atmospheres, with the goal of understanding the clouds and climates of the terrestrial planets. His research on the asteroid impact that killed the dinosaurs led to the discovery of nuclear winter due to the major decrease in temperature. He is a fellow of the American Meteorological Society and the American Geophysical Union.

Lecture: “Use of In-situ Observations to Examine Aerosol Impacts on Mixed-Phase Arctic Clouds, Radiation and Climate”

Comprehensive data on arctic boundary layer aerosol and cloud microphysical and radiative properties were collected during the 2004 Mixed-Phase Arctic Cloud Experiment (M-PACE) and the 2008 Indirect and Semi-Direct Aerosol Campaign (ISDAC). During M-PACE, data from in-situ microphysical sensors were collected that characterize how cloud particle shape, size, phase and bulk properties varied with height. A much more comprehensive dataset was obtained during ISDAC, in which an unprecedented suite of 42 cloud and aerosol instruments was employed to study the influence of aerosols on clouds affected by ice. In-situ data obtained during ISDAC above, below, and within single-layer stratus are leading to a process-oriented understanding of how aerosols affect the microphysical and radiative properties of arctic clouds. Ultimately these data will be used to improve the representation of cloud and aerosol processes in models covering a variety of spatial andd temporal scales, and to determine the extent to which long-term surface-based measurements can provide retrievals of aerosols, clouds, precipitation, and radiative heating in the Arctic.

Dr. McFarquhar is a leading authority on Cloud Physics, especially the physics of ice particles in clouds. In the tradition of Peter Hobbs, McFarquhar has led many field experiments using aircraft to make detailed measurements in clouds. His scholarship and teaching have been honored by the University of Illinois and the Canadian Meteorological and Oceanographic Society.

Lecture: “Origins of the Most Damaging Winds in Extra-Tropical Cyclones”

Dr. Browning served as the Director of Research in the UK Met Office. He is a Fellow of the American Meteorological Society, receiving the Rossby Medal in 2003, Past President of the Royal Meteorological Society, receiving the Symons Gold Medal in 2001, and a Fellow of the Royal Society. His work with Frank Ludlam on the supercell thunderstorm at Wokingham, UK in 1962 was the first detailed study of such a storm. His research covered many areas of mesoscale meteorology including developing the theory of the Sting jet.

Back to Top
News and events