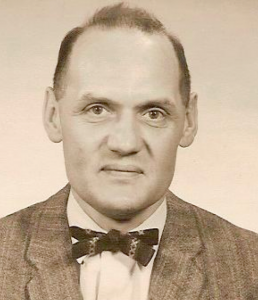 Frank was born in Mansfield, Ohio, and earned his BS in 1935 at University of Chicago, MS in 1948 at NewYork University, and PhD in 1950 at NewYork University. He worked 6 years as a chemist after receiving his BS. Attended weather school at the University of Chicago followed by 3 years service as a meteorologist in the Air Force, 3 months as an instructor and the final year as squadron officer in weather reconnaissance, in charge of 10 officers. He was a part time instructor at New York University. He was invited to be a “senior supervisor” at UW on May 31, 1950, by Phil Church. He accepted 10 days later stating, “the field of micro-meteorology, including the study of turbulent diffusion of matter and other transport phenomena, is still pretty much wide open.”

Life & Career of Franklin I. Badgley with photos of Frank throughout his life, letters and telegrams exchanged with Phil Church offering him various positions at UW, and much more.

From his obituary published in the Seattle Times, May 2009

Franklin Ilsley BADGLEY December 20, 1914 ~ April 28, 2009 Franklin Ilsley Badgley died peacefully on April 28, 2009. He was born in Mansfield, Ohio and spent his early years on a Wisconsin farm. The family moved to Flossmoor, Illinois, and Frank entered the University of Chicago at age 16. After gradua tion, he worked as a chemist for Swift & Company where he met his wife of 65 years, Helen Cunningham. Frank was a proficient pilot. On an early date, he courted Helen by flying his old open cockpit biplane over the family home, tipping the wing to acknowledge his mother waving her handkerchief from the ground. (Helen recalled her relief when he dropped her off before practicing “loop de loops.”) In 1942, Frank volunteered for the Army Air Corps and was stationed in the Azores Islands. Later, he earned his Ph.D in Meteorology from New York University and began a fulfilling 32-year career as a professor and chairman of the Atmospheric Sciences Department at the Uni versity of Washington. He was one of the founders of the Quater nary Research Center. Every day, rain or shine, he commuted to the University by bicycle from his home in northeast Seattle. Like his ancestor, Benjamin Franklin, Frank was a renaissance man. He was a skilled furniture maker, poet, singer, author, scientist and his torian. He liberally quoted Shakespeare and loved to embar rass his young daughters by breaking into song at inopportune times. Recently, he enjoyed re searching, writing and lecturing about the adventures of another ancestor, Patrick Gass, of the Lewis and Clark Expedition. Frank was a longtime member of the Lake City Presbyterian Church and sang in the choir. In 1997, he and Helen became “pioneer” residents of the Wallingford University House where he served as Chairman of the Residents Association. Frank commented that these years at University House “were some of the best” of his life. Frank was a quiet, kind, and approachable man with a dry wit. His grandchildren, Wilson Franklin Walker and Catherine Helen Walker, adored him, calling him Paca. They thought that he was the smartest, most fascinating man ever. He sang, composed limericks, and recounted personal stories of attending Franklin D. Roosevelt’s first inauguration, seeing magician Harry Houdini perform, building igloos in Alaska, and conducting research in the Indian Ocean. As a World War II veteran, he unwaveringly opposed war, marching in anti- war demonstrations with his family. His philosophy of life was to live by example. Frank’s family will miss him very much. He is survived by sister Marian Lyons of Clinton, Mississippi, brother Charles Welling Badgley of Lakeview, Florida, daughter Jeanne Ilsley Touger (Steve) of Lofall, Washington, and daughter Anne Badgley (Mark Walker) of Portland, Oregon. His son, Franklin Jr., died in 1953. His wife, Helen, and his lifelong best friend, Arnold Woodrich, preceded him in death. Frank and Arnold communicated regularly for more than 70 years. When together they talked into the early hours of the morning about an endless range of topics. Frank’s family is confident that Arnold and Frank have now picked up their animated intellectual conversa tions just where they left off. Frank was especially proud of his two beloved grandchildren for their intellect, kindness and humor. His eyes lit up when they appeared. Through them, Frank’s renaissance qualities have been passed down to a new generation. They inherited Frank’s joy of learning and the arts as evidenced by Catherine’s love of books and music, and Wilson’s talent for the guitar and craftwork. Frank was so pleased with their passion for knowledge, their desire to master other languages and their fascina tion with science and other cultures. He left confident that they were launched on lives even more interesting and wonderful than his own. A private memorial has been held. Remembrances to Habitat for Humanity and the Intiman Theatre. An on-line guest book may be found at www.mem.com.
Back to Top
About